Snow Angels – My Near-Accident on the Martin Grove Rd. Exit via Islington Ave.

An ‪#‎openmiracle‬ happened to me on Wednesday morning on my way to work. The night before was a huge snowstorm that covered much of the GTA (Greater Toronto Area). The following morning the highways were cleared on my way to work. What I didn’t realize until it was too late was that the exits and […] 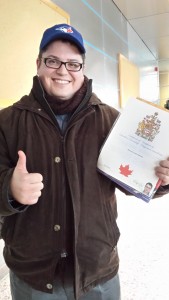 How to Conquer the Snooze Button

This is how I feel sometimes at work (diffusing the bomb) when asked surprise questions, not respecting that full concentration is needed!

This recently came my way. Amy Dickenson apparently is a columnist for the Denver Post answering self-help questions. She’s right in this one: When you see someone down and to the ground, you have a moral obligation to help that person back on ones feet as much as possible, not avoid them. Otherwise, yes, you […]

Coming Together – Coca Cola Propaganda Commercial on Health Plus Parody

Mister Rogers defending PBS to the US Senate

In 1969, Fred Rogers appeared before the United States Senate Subcommittee on Communications. His goal was to support funding for PBS and the Corporation for Public Broadcasting, in response to significant proposed cuts by President Nixon.

Monday morning, August 13, 2000. Brighton Beach at West 8th Street. My friend and I, each at the time 17 years old, went to the DMV (Department of Motor Vehicles) to apply for the Learners Permit exam. At the time, getting those 6 points of ID was really difficult. A passport was worth 4 points, […]

Due to the space in Hong Kong, apartments are small and expensive. Gary Chang, an architect, decided to design a 344 square foot apartment to be able to change into 24 different designs, all by just sliding panels and walls. He calls it the “Domestic Transformer.”